An opportunity for  Anne McIntosh to strike back?   Hard to believe but only eight weeks ago Scarborough Seafront sufferred the worst flooding in over 60 years. The local media, Yorkshire Coast Radio provided live coverage of the flooding, and captured local peoples expressions of dismay, shock and heartbreak as peoples livelihoods, businesses and investments were drenched in sea water.  The initial feeling of helplessness and "all we can do is watch" was superceded by incoming coverage from Whitby, especially Real Whitby, as a mini tsunami not only washed away business along the harbour and riverside but caused blackouts amidst swirling waters surging into peoples homes.  With a few small fires breaking out amidst the black out and rising waters,  that very frightening experience with a rising level of fear for public safety was matched by a community spirit of courage and co-operation that surely resulted in no lives being lost.    Back in Scarborough the swift action of Scarborough Council alongside other agencies had set in operation a task force of traffic wardens, bin men and other council workers, including some managers and officers,  many laying sandbags before the event and many assisting with the inevitable clean up operation.   Indeed, they were prepared: http://www.scarborough.gov.uk/default.aspx?page=17664 .  Whilst all along the Yorkshire Coast the flooding became a misery for many, a certain Missy (MP for Filey) was paying very close attention.

Whilst the worse was to come for Whitby,  with residents losing their homes, personal belongings, family heirlooms and other valuables, sentiment was overtaken by a need to get on with it, and pictures of smiling ladies with mops in hand covered local pages.   It was reported by the BBC http://www.bbc.co.uk/news/uk-25258150.

The predicted tidal surge was caused by an 'unusual' weather system including high winds and low pressure.  At that time the Environment Agency played their part by issuing warnings and alerting the public to the ensuing dangers urging people to stay away from beaches, harbours and cliffs. "waves could wash people into the sea.  They are capable of catching you unaware. Cliffs are subject to heavy erosion and could cllapse without warning".

Worse still was yet to come for Hull.  At high tides the Environment Agency (EA) began lowering Hull’s tidal barrier,  thought to be holding back a surge of two metres of tidal water which could have affected thousands of homes in Hull. The water was only a few feet from breaching the huge barrier, and the Environment Agency claimed that up to 19,000 homes had been saved.  Built in 1980 the barrier is closed about 12 times a year and has protected the City from the effects of more than 30 high tidal surges since.

In Hull the floods of 2007 that were predominently caused by heavy rainfalll,  affected over 28,000 properties, with over 10,000 homes being evacuated 17,000 homes flooded and 35,000 people being displaced, may over a period of several months.  The EA  have on ongoing strategy:  http://www.environment-agency.gov.uk/static/documents/Leisure/Hull_Strat... NB Hull has recently become the centre for renewable energy the Humber estuary is listed as one of eight main sites around the UK where tidal power stations could usefully be built, with only 20 sites in the world having been identified as possible tidal power stations.

The Environment Agency was established in 1996 as part of the Department for Environment, Food and Rural Affairs currently headed by Owen Paterson, and has faced substantial budget cuts with further budget cuts of £ 300 mil to be found and is set to lose 1700 jobs in the next twelve months.  Whilst the BBC and mainstream media show Cameron et al climbing all aboard for the present flooding crisiss south of Watford I feel it is worth applauding the Missy MP who was paddling faster than the current tide:

Anne McIntosh the local MP for Filey, Thirsk and Malton (recently deselected)  under her hat as Chair of the EFRA,  on 7th January 2014 called on Defra to clarify how the future cuts will impact on the Environment Agency’s ability to tackle the threat of flooding.  Clearly criticising her own Boss whilst remaining in touch with local reality,  Anne McIntosh said: “Defra is a small ministry facing massive budget cuts and which relies on a large number of arms length bodies to deliver many significant areas of policy. Ministers must clarify how further budgets cuts of over £300 million over the coming 2 years will impact on the funding provided to these agencies and the ability of the Department to respond to emergencies.”

“Recent flooding events over the Christmas and New year period reinforce the Committee’s concerns about cuts to the Defra budget and how these will be realised. “

“We have asked the Department to confirm the amount of contributions received from external sources under the Partnership Funding approach and to demonstrate how the Partnership Funding model for flood defences will deliver much greater private sector funding in the future. This will allow the drainage boards to do more of the essential maintenance work of main watercourses using their own resources.”

Meanwhile, whilst local Tories have untimely carved their knives into Ms McIntosh, others are blaming the ongoing floods now devastating the Home Counties as a blatant conspiracy between the Labour Party and the Environment Agency to topple Cameron and his Conservative Govt.

Whilst Robert Goodwill is away playing with his new trainset, it seems Anne McIntosh is at the top of her curve, and best of luck to her.

and from Wear Red: 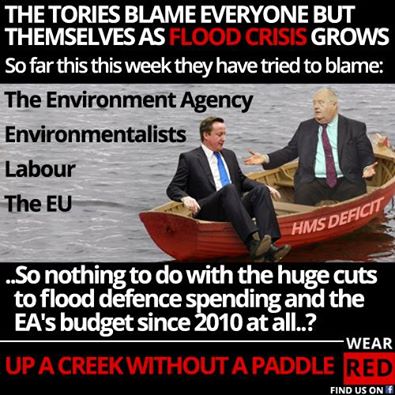