Drax - to drop a E 300 mil Euro boost for the region and an environmental project set to be developed in our North Sea. (thats about £ 250mil)

Commissioner for Climate Action Connie Hedegaard made the announcement from the European Commission in Brussels at midday today. Linda McAvan was instrumental in establishing the NER300 fund with cash generated from the sale of carbon permits as part of the EU’s flagship Emissions Trading Scheme. Linda said; “I am delighted to see that the EU is investing in the White Rose project. As well as the immediate jobs that the CCS project would create, the potential to export this technology, once developed, could also bring untold economic benefits to our region.”  “CCS technology is also essential if we hope to meet ambitious climate action targets and reduce the amount of Carbon being released into our atmosphere. Yorkshire is the UK’s most energy intensive region making it ideally suited to the development of CCS with a cluster of large emitters of carbon and plenty of off-shore storage space."

The EU confirmed the White Rose Project, centred on the Drax power station near Selby, will receive Euros 300 million. It will see the building of a new power plant with harmful gases captured and piped for storage under the North Sea.

White Rose itself is expected to support around 2,000 jobs but is likely to help create many more as it kickstarts the wider carbon capture and storage (CCs) industry in Yorkshire. The region is seen as a prime location for CCS because of its history of power generation and heavy industry and proximity to the North Sea. Energy and Climate Change Secretary Edward Davey said: “This is great news for Yorkshire and for Britain. White Rose will create thousands of green, local jobs and make a real difference to cutting carbon emissions.  “The UK is at the forefront of developing carbon capture and storage, with excellent potential for storage in the North and Irish Seas, and the expertise in operating offshore to make it a reality.

“And as a world leader in the technology, as carbon capture and storage is commercialised Britain will be in first place to export this knowledge to a decarbonising global economy.” Yorkshire MEP Linda McAvan, who played a key role setting up the EU fund which is backing the White Rose Project, said: “I am delighted to see that the EU is investing in the White Rose project. “As well as the immediate jobs that the CCS project would create, the potential to export this technology, once developed, could also bring untold economic benefits to our region.”  The White Rose Project is a joint venture between Drax, Alstom and BOC. Chief executive Leigh Hackett said: “We are well on track to demonstrate the key role that CCS can play in the future UK energy mix. CCS is an important technology providing clean, reliable and cost competitive electricity with the potential to contribute greatly to the decarbonisation of global power markets.”  source Yorkshire Post:  http://www.yorkshirepost.co.uk/news/main-topics/politics & Linda McAvan MEP ; http://www.lindamcavanmep.org.uk/latest-news/post/eu-to-award-300-millio... 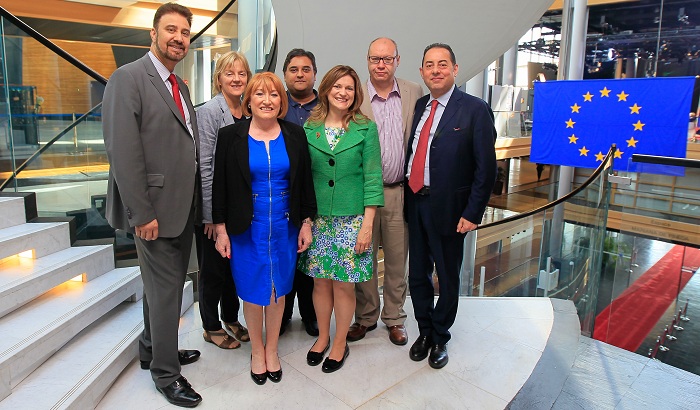 This news follows Linda McAvans MEP election to the  EU's top job as Chair of the Development Committee   "MEP for Yorkshire and Humber, new chair of the European Parliament's development committee, said:

"I am delighted to have been elected as the chair of the European Parliament's International Development committee, and am grateful for colleagues' support. I will work to ensure the committee plays a full part in tackling poverty across the world.

"The next Parliament will bring a huge opportunity to make progress in the developing world through the UN's post-Millennium Development Goals, the European Year of Development (2015) and the UN climate summit in Paris next year. My task is to ensure the committee has a strong voice on these issues, and I relish the challenge that brings.

"This position is a great opportunity for us as Labour MEPs. We can advance our cause for social justice, and demonstrate the added impact that working with across countries across the EU can have. I look forward to working with all those active on development policy in the period to come."  Source - Labour in Europe:  http://www.eurolabour.org.uk/labour-meps-top-jobs-european-parliament?fb...

Linda is also keen to promote Fairtrade throughout the Yorkshire Region and following the Tour de France said of Fairtrade Yorkshire; On the Road to a Fairer Future "this was a good idea ":  https://www.youtube.com/watch?v=OXTbH3eCdYI

and the importance of 'gas' :

Barry Gardiner gets 'stuck in'...

"City of Durham’s Labour MP, Roberta Blackman-Woods -... if they do not want us there, that’s their right to do that... I’m just happy to be out and about with the banners from my constituency, meeting people, having a great day out like everybody else. That’s what I’m going to do."

Must be a hemisphere thing ... if all the mysogonistic footed men would move south of the equator....

Cos I just can't wait to be King.

Hmmm ... On reflection thats probably  the most sensible thing I ever said.

JC would definitely not have cut a deal  with the Conservatives ... wot No Boris for No General Election?

Is it safe to talk about Trident & Capital Punishment or shall we just hijack another politcal party?

"... Drax Group chief executive, Dorothy Thompson, said: “This report shows Drax is supporting more than 14,000 jobs across the UK, with the vast majority resulting from our upgrades to biomass technology.

“The economic benefit has reached all parts of the country. We have been the catalyst for rejuvenation and growth across the Northern Powerhouse with port expansion on the coasts of East Yorkshire, the North West and North East.

“Drax is now the UK’s biggest single generator of renewable power. With the right support from Government we aim to upgrade more of our electricity production to using compressed wood pellets. This would provide a further boost to the UK economy, and deliver increased carbon savings....”

"A judge will rule on whether North Yorkshire County Council acted unlawfully in reaching its decision to approve a test drilling site for the extraction of shale gas in Ryedale at a hearing in November.

Friends of the Earth has confirmed that the case, brought jointly with campaign group Frack Free Ryedale, will be heard at the Royal Courts of Justice in London on Tuesday, November 22 and Wednesday, November 23.

The legal challenge was launched after the county council’s planning committee voted in May to grant Third Energy permission to frack using an existing well at a gas field near the village of Kirby Misperton.

Campaigners argue that the council’s decision was unlawful because it failed properly to assess climate change by not considering the environmental impact of burning gas from its KM8 well at a nearby power station at Knapton, and that it failed to secure long-term financial protection against any environmental damage.

The forthcoming court hearing will take the form of a “rolled up” hearing during which Friends of the Earth will put forward their case to the judge who will then rule on whether the challenge should be put to judicial review. If the case is put forward, the judge will then make a ruling on the case.

Simon Bowens, Yorkshire and Humber campaigner for Friends of the Earth, said: “The decision made in May by North Yorkshire County Council was potentially unlawful due to their failure to both assess the true impact of gas emissions from the development and for failing to put in place long term protection from very considerable risks from the site.”

Asked how confident he was that the legal challenge will succeed, Mr Bowens said: “It is difficult to say. We have put forward a very strong case.”

A spokesman for North Yorkshire County Council said: “North Yorkshire County Council welcomes that a date has been set for the hearing. We are confident that we have followed proper processes and gave proper regard to all material planning considerations before approving the application by Third Energy to undertake fracking for shale gas in the vicinity of Kirby Misperton.”

In a statement released this afternoon, Third Energy said: “It is in the interests of both the local community and Third Energy that a decision is reached quickly. This ‘rolled up’ hearing which will mean all the issues will be dealt with at one hearing.

“Approval for the KM8 application came after an exhaustive review by NYCC and a comprehensive, specially convened planning committee meeting which lasted two days, and we have every confidence that the council has followed all due processes in coming to its determination.”

If North Yorkshire County Council is cleared of any wrongdoing, then Third Energy is not expected to be ready to carry out any fracking until early next spring at the earliest. Should the ruling go against the council, then Third Energy’s planning application would have be re-heard by the council...."

Mr Osborne, whose salary was not disclosed, will remain an MP, but will not be allowed to lobby the government.

He said it was a chance to work with one of the world's most respected firms and a major employer in Britain."

"TAXPAYERS have “little to show” for £100m spent on a Government competition which dashed Yorkshire’s hopes of leading the world in clean coal technology, it was claimed today.

The National Audit Office found the Government’s attempt to kickstart carbon capture and storage in the UK was “ambitious, but ultimately, unsuccessful”.

The Government launched a competition in 2012 offering £1bn to companies which could put forward credible plans to use carbon capture and storage technology.

A plan known as the White Rose Project based around the Drax site emerged as one of the leading contenders before the competition was abruptly scrapped by George Osborne in 2015.

It had been hoped White Rose could create 3,500 jobs in Yorkshire and put the region at the forefront of CCS technology."

Mr Osborne added: "BlackRock wants better outcomes for pensioners and savers - and I want to help them deliver that."

He joins his former chief of staff, Rupert Harrison, who is a senior strategist for the US investment firm.

"George has a unique and invaluable perspective on the issues that are shaping our world today," said Laurence D. Fink, chairman and chief executive of BlackRock."

"A quiet revolution is taking place at Drax Power Station, which could become the UK’s first to run entirely on wood pellets. Neil Hudson took a walk around the UK’s biggest power plant

There were a few occasions last year when the whole of the country was running entirely on alternative power (that is: not coal) and Drax in North Yorkshire was supplying around 20 per cent of that.

!So what were they using instead? Wind? Solar panels? Ancient crystals? No. The answer might surprise you: wood pellets. It looks a bit like cat litter, the biodegradable kind made from compressed wood...."

it really is not OK to squash the ships cat.... looks like a drowned rat poor thing t'other cats are being sympathetic...  waiting.