sacrificed on 14 August, 1947 on the altars of politics, religion and greed

Enshrouded in the mists of time, born out of the heat, dust, and slime, Panch for five, ab for rivers, was the Land of the Five Rivers.

The Jhelum, Sutlej, Ravi, Beas and Chenab gave the area the name of the Punjab. Canals were dug in the land between to make our country rich and green.

The Jumna and Indus rivers, east and west, the Thar desert to the burning south, the mighty snow-capped Himalayas above, bounded the land we came to love.

Constant water from the hills did stream, to make this land a farmer's dream. For our wealth, they came far and wide, some to kill and steal, some to stay by our side.

Genghis Khan and Alexander the Great they came knocking at our gate, Barbur, Akbar and Tamarlane, and then in the 1800's the English came.

They wanted the Afghans a lesson to teach, but for them Kabul was difficult and costly to reach, so they asked if our land they could pass through, and for the use of our fighting men, too.

Also trade with Central Asia was their aim, and the shortest route through our homeland came, so all that they did now require was to add our land to their Empire.

They were invited by our leader a while to stay, but, having seen our land, were not keen to go away. Our wealth and warriors they could use, and so to stay they found an excuse.

They said one day we will be free, but there was a price for our liberty. We had to leave the land of our birth, and fight for them all over the earth.

In 1857, during the Indian Mutiny, they were being pushed back to the sea. They came to the north-west for help from their friends, and thousands of our young men we did send.

We helped in the First, Second and Third Afghan War, our young men were killed by the score. The reason there, without a doubt, was to conquer the Afghans and keep the Russians out.

We fought for them in World War One. In the cold of France and under the Mesopotamian sun, and then again in World War Two. In Italy, Burma, and North Africa, too.

And in all the battles before and in between, fighting for the King and Queen. Some fighting men lived, a lot more were dead, the largest volunteer army ever, it was said.

The irony was there for all to see, Eastern slaves dying to keep the Western world free. Slaves we were born; as slaves we died, not many Western people for us cried.

In 1919, after the first world war, they enforced Lord Rowlatt's law; more than three together could not meet, whether in a compound or in the street.

All talk of freedom could now be quelled, and people arrested without trials held. Their few civil rights were to them denied and without juries they could now be tried.

The soldiers returning from the field of battle, asked why they were being treated worse than cattle. Some demonstrated against their lot, and a number of them were shot.

Some people a meeting decided to hold, even though this was unlawful they were told. They chose a large garden with walls around, those walls were thick, high and sound.

Some went to talk, others just to look. Even their children with them they took. They had no guns or cartridge belts, Just wanted to talk about the way they felt.

Jallianwallah Bagh will always be remembered, where 379 were killed and 1,500 injured.  Dyer blocked the exits and fired with intent, until one thousand six hundred and fifty bullets were spent.

The dying and injured were left unattended, because the curfew had not been rescinded. All night they lay in the heat on the dusty ground, and in the morning by their relatives they were found.

They shocked the world; they said no one gloated. Then why, oh why, was General Dyer promoted? He was sent elsewhere to fight and kill, and spread their message of peace and goodwill.

Under the eyes of the world they had to relent, and allowed us our own local government. This gave us a taste of the freedom to come, to be shattered in 1947 by the law of the gun.

A better canal system they helped us build, and soon the warehouses with wheat were filled. Our agriculture improved and in years to come "The Granary of India" we did become.

They showed the world that we were kind and good, but under thick covers their machine guns stood, and if, by striking, their profits we disrupted, those covers were lifted and the guns erupted.

In 46, total freedom in two years they said, a few months later that freedom was dead. Then only a choice between Pakistan and India, and in 47, no choice, just partition and fear,

War-weary England bowed to their demands, turned her back on us and gave her commands.  To Radcliffe who, with pen and little thought, drew a line on the map from south to north.

Fresh out from England, Radcliffe fitted the bill, his knowledge of the Punjab was practically nil. His line through town, village, and hamlet ran, giving the east to India, the west to Pakistan.

Without weapons, three countries we could not take on, we were forced to admit that our freedom was gone. Our choice, as stateless people the world to roam, or to remain as slaves in what was once our home.

The Indians got a lot of extra land, Pakistan more, to make up for her desert and sand.  For England, India's promise to stay in the Commonwealth. The Punjab's share - partition and death.

For 100 years we had given our all, whenever we got their rallying call. Our reward, for all the world to see: Partitioned and sold into slavery.

They said to us that we were one, "Come help us make our Empire strong." But when the fighting was all done, it was: "Get back you wogs to where you belong."

They took our land, split it in two, "One piece for me, one for you." This was by our so-called friends, nothing said or done can make amends.

When it was done millions were dead, just wogs killing wogs their media said. Our crops destroyed, our homes burnt, was there a lesson to be learnt?

The demobbed soldiers returned to find no trace of homes or families they had left behind. Without weapons, money, and jobs, too, there was not much that they could do.

With their homeland split in two, and the border sealed, what could they do? Some left, some wept, some with their bare hands fought, but all their struggle came to nought.

Searching for their families in the chaos and disorder, thousands lost their lives crossing the border. To this day millions do not know what became of the kin they left long ago.

Those left behind could only toil for the foreign troops now on their soil, who could only control people in village and town by declaring martial law to hold them down.

Lord Curzon in 1901, and Churchill in 31, said, 'That without India the British Empire would be dead.'  Though England over other countries then did tower, without India she would become a third-rate power.

God knows, if The Raj had been just and fair, their mighty Empire might still be there. The only thing common in their Commonwealth was in battle to earn a common death.

They say they gave us learning and trains. We had universities long before they came.  The railways were built to cater for their greed, To transport their troops and merchandise at speed.

In 1939 India 189,000 men to the war did send, this rose to two and a half million towards the end. Every one of these was a volunteer, ready to die for the King they revered.

The British Indian Army passed many a test, of 76 battalions, 49 came from the north-west, and a large percentage of Punjabi brothers was also to be found in ten of the others.

Though they were one-seventeenth of the population of the entire Indian nation, the Punjabis supplied more than 60 per cent, of the total troops from the sub-continent.

A nation or its descendents can someday regain a country conquered but which intact does remain, but one thing is an absolute certainty, a country divided is lost for eternity.

If independent we had been allowed to remain we could have supplied both countries with warriors and grain. All one can now foresee are horrors untold.

When the two time-bombs set in 47 eventually explode. 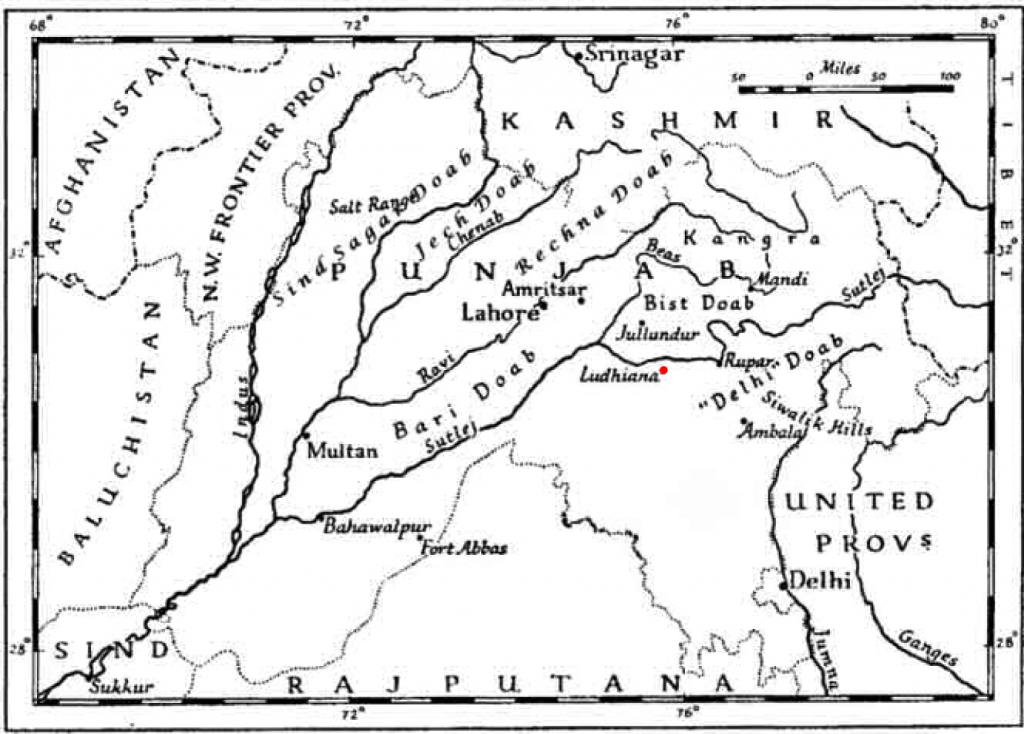 by P J, written in Scarborough1985

"... “Hindus, Sikhs, Muslims … we had all lived side by side without any problems, but then Partition happened and everything changed. When one person or family was attacked, another wanted revenge. There didn’t seem any way of stopping it.”

Seventy years on the scars of Partition still run deep. Marking the end of British colonial rule the idea of creating two new countries – Hindu-dominated but largely secular India and the Muslim state of Pakistan – had much ground support, but its handling by a group of civil servants couldn’t have been worse.

While some doubt that two years will be enough for Britain to successfully extricate itself from the EU, the Partition of India makes Brexit look like a masterclass in diplomatic negotiations...."

"With no time to absorb the change, overnight Muslim and Hindu families found themselves on the wrong side of the division. It’s hard to be precise, but in the years that followed 14 million were made homeless and estimates for those who lost their lives in the outbreak of violence and persecution which followed range from a few hundred thousand to half a million.

And yet it’s a period in history which rarely makes it onto the school syllabus and which even those in the South Asian community who later migrated to Britain rarely talk about.

“Understandably it is still a contentious issue, but with the 70th anniversary approaching that’s why we wanted to create an exhibition,” says Samayya Afzal, diversity development officer at the Peace Museum in Bradford which has launched the Peace After Partition project to explore the events of seven decades ago."

For more details about the Peace After Partition project go to peacemuseum.org.uk and for the online archive visit 1947partitionarchive.org

“So it’s a very relevant story not just for the Asian community, but also the English community, because it’s about our joint history. It’s important to remember that a lot of English people have a history with India too.”

There is currently no memorial to the victims of Partition, but this year may mark a turning point in recognising a previously untold chapter in history and remembering that behind the statistics were the faces of ordinary men, women and children.

“So often, Partition is spoken about in terms of the violence that occurred,” says Arshad Mirza, one of the archive’s citizen historians.

“Of course, the brutality cannot be ignored, but these stories tell of compassion and friendships between people of different faiths that could not  be broken. These stories are hidden from our  usual sight, and we will not know about them unless we ask.”