Harbour Task Group  Member 'Bob'  has called on the Scarborough Council to take urgent action on managing crocodiles in the South Bay following another sighting.

The call to arms follows the sighting of a crocodile, believed to be between 1.5 metres and 2 metres, at Cayton Bay on Monday night.

Witnesses claim the crocodile walked out of the water and sat on the beach just metres away from people for about half an hour.

Bob said he planned to take action against the Council's Portfolio holder and the two Scrutiny members for “the most obvious breach of duty of care”. 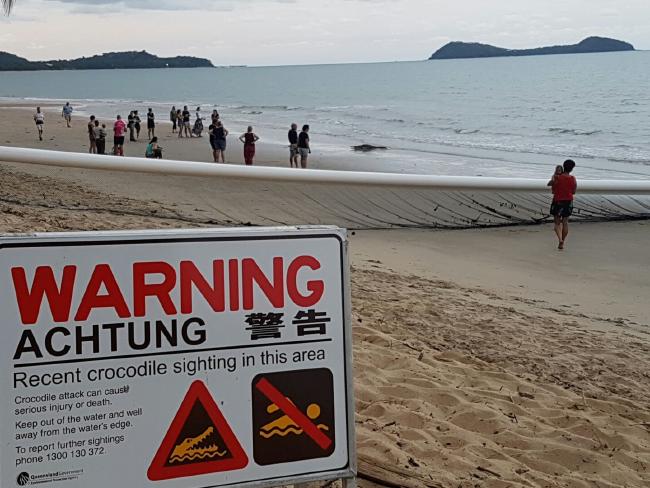 Meanwhile locals are forming a 'Save the Crock' group ...

Under the Bathing Water Directive, bacteriological water quality at Scarborough South Bay was classified as poor in 2016.  This was unexpected following significant investment by Yorkshire Water in 2014 to improve bathing water quality.

In response to the result, investigations by Yorkshire Water and the Environment Agency have established that the discharge from the outfall at Wheatcroft could have more impact on water quality than had been previously thought.  In addition it has become clear that there may be a number of other sources of bacteria impacting on the bathing water quality which is known to be impacted by occasional high peaks in bacterial contamination.

This investigation sought to establish any similarities and relationships between the bacteria present in a number of identified potential sources around Scarborough Bay and the bacteria found at the bathing water at Scarborough South.

A number of techniques were employed looking at the origins and characteristics of the bacteria found in samples of various sources and receptors taken during the summer of 2016.

The key conclusions are:

The final effluent discharging from the Wheatcroft outfall contains high numbers of bacteria and that these were found on occasion, but not consistently, in the bathing water at Scarborough South.

There is a strong indication that sea bird faeces is likely to be contributing to overall bacterial contamination of the bathing water at Scarborough South.

A marker associated with human pollution was consistently detected in the bathing water at Scarborough South.

A marker associated with dogs was found in 2 of the samples taken from Scarborough South.

None of the samples taken from either Scarborough South or North Bays contained markers associated with ruminant animals (cows/sheep)."

"China’s prototype space station, Tiangong-1 or “heavenly place”, is falling to Earth and could re-enter the atmosphere as soon as this week.

While most of the eight-tonne spacecraft is expected to burn up as it plummets through the atmosphere, there is a chance some of it will survive all the way down to the surface.

"About 70% of the Earth is covered with water and most of the rest of it is sparsely populated. If any of the space station does reach the surface, it is incredibly unlikely it will hit any person, let alone you...

"It is orbiting at about 27,000km/h, so a crash site is virtually impossible to predict. If you get the entry time off by an hour, you’ve got the location off by at least 27,000km.

The satellite can only re-enter within the latitudes of its orbit – 43° North and 43° South. That rules out a descent over the UK but it does cover much of the Earth..."

To Russia with a shove?

“The question is, why are Germans often so proud to be the world’s champion savers?”