Finally we have our live web cam working, (slight technical hitch)  just as the demolition of the Life Boat House is in progress.  The demolition team have carefully removed asbestos found in the roof that was transported away in a sealed truck.

The workmen have taken the tiles off the roof to be stored and a brick by brick process has been carefully followed to reclaim some of the historic 'artefacts', namely the old plinth that covered the doorway of the boat house. Which I am delighted to say has been removed in one piece. 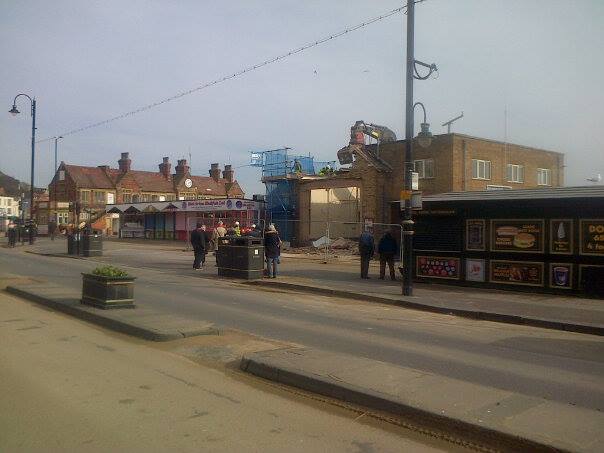 The heavy machinery is now working or the rest of the building though I am surprised they have not taken the flag poles down yet.

Whilst the demolition team have started to the left side of the building we do not have immediate access to the webcam but that part of the building is now more or less finished.

It is business as usual for traders gearing up for the start of the summer season, some whining about dust has been heard, but the rate of work by the demolition team will probably see the end of any 'nuisance' by the end of next week.

Tis quite sad to watch really. :-(   an end of an era,  but on the brightside any urban myths regarding the former lifeboat house should surely now be assigned to the past. 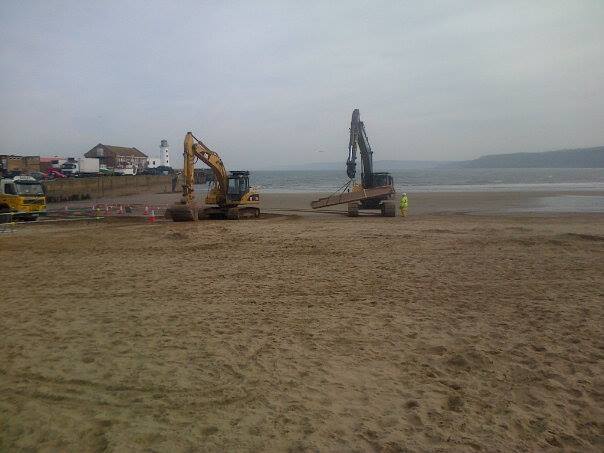 It was reported earlier in the year by the SN that the money has been raised to equip the lifeboat house.

On the other hand the Whitby Gazette have gleefully reported on the new 190 mph search & rescue helicoptor : see here: http://www.whitbygazette.co.uk/news/local/our-new-190mph-life-saver-heli...

"A statement released last year by The Bristow Group – the private company taking over the running of the UK’s search and rescue operations on behalf of HM Coastguard – said that given their aircraft will be faster than the Sea King fleet, it anticipates a reduction in average response times to incidents across the UK.

The distinctive yellow Sea Kings, which have been a familiar sight over Whitby and the surrounding area since 1964, will will cease to operate on April 1.

A spokesman for the RAF said the current Sea King helicopters had come to the end of their service and would either be sold privately or scrapped.

The Sea Kings will however be missed by Whitby’s RNLI crew, according to second coxswain Howard Fields, who warned that just because the S-92s can fly faster doesn’t mean that response times will necessarily decrease."

Yep, and the all too familiar yellow Sea Kings, instantly recognisable by their deep throttling sound will no doubt be sorely missed by all the residents of both Scarborough & Whitby, the sound of which would always cause many locals to catch their breathe, look upwards and make the heart leap in anticipation & recognition of the mission that the Sea Kings were on.

So far as am aware the two Sea Kings that regularly patrol our coastline, based at RAF Leconfield are still in operation.

And, more recently and most tragically: http://www.yorkpress.co.uk/news/11810446.Man_dies_in_sea_off_North_Yorks...

Again, the passing of an era? New technology (pagers) have replaced the old three booms that once called the Lifeboat Crew to action, and if and when the Sea Kings are permanently retired that 'dreaded' old sound will cease.

Shame really because the heartfelt sounds pulled the strings of locals, and were a stark reminder of the perils faced by those at sea.   Perhaps they should improvise and maintain the 'warning' booms, so our thoughts remain with the crews whenever the 'call out' is heard ... "wiser heads than mine".

Just to end on a happier note, many local school kids were often treated to a 'friendly' visit by the Sea King crews ...

Ah, here we go, a blast from the past,  a truly inspirational woman  :-)

Seaking 128 landing on west cliff this Sunday between 10.30 and 11.30. Come along and say a final farewell before they're decommissioned!"

People on the Yorkshire coast are getting the chance to say goodbye to the RAF Sea King search and rescue helicopter tomorrow.

The crew is inviting the public to come and talk to them and look round the aircraft as they do a routine training operation.

After more than 50 years' service, the Sea King is being replaced by Bristow Helicopters which will operate from Humberside Airport from April.

Here is where they will be tomorrow:

Now if we could just get them to abandon one on the South Bay Pool that would be soooo cool!