Yesterday Scarborough's RNLI held an event to mark the handing over of the 'old' to the 'new' Lifeboat Operations Manager.   The old LOM Tom Fox seemed quite pleased to hand over the reins to new LOM John Senior. 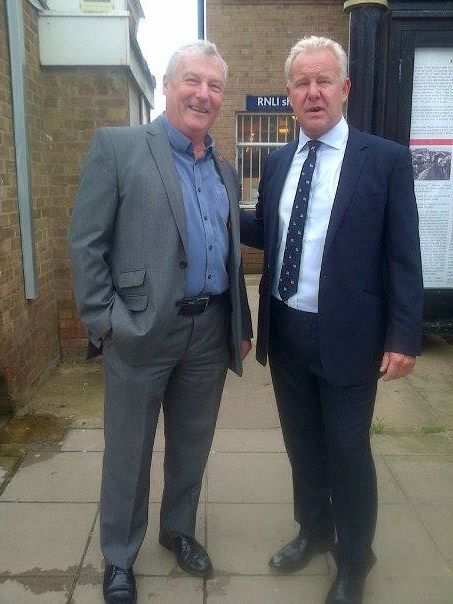 Also invited was Paul Boissier RNLI chief from Poole (http://rnli.org/howtosupportus/getinvolved/Volunteer-zone/Pages/Voluntee...) who is pictured with local RNLI and former Rowing Club stalwart carrying the flag for Scarborough. 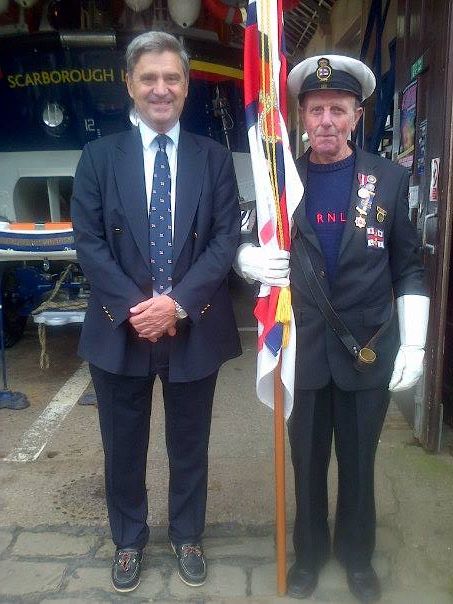 A reception was held upstairs for crew and lifeboat members followed later in the evening by a party, presumably catered for and hosted by John Senior who has several eating establishments in the town, indeed his wiki page seems regularly updated and he seems an all round decent kinda chap:   http://en.wikipedia.org/wiki/John_Senior

Having worked with Tom Fox (Leader of Scarborough Borough Council - http://democracy.scarborough.gov.uk/mgDeclarationChangesPrintView.aspx?n...) in organising and supporting Scarborough's very successful Armed Forces Day it would seem that the handing over of the Lifeboat's reins would be a mere formality and Tom's resignation as LOM will  be marked by some as a sad day but as they say as one door closes another one opens .... John Senior is also Chair of the South Bay Traders Association and a listed director of the Scarborough Business Ambassadors  (http://scarboroughbusinessambassadors.org/) & (https://www.companiesintheuk.co.uk/ltd/scarborough-business-ambassadors) who now have approval for the £ 10 mil for the Scarborough Business Academy.

Anyhow I managed to have a few quick words with the new LOM, John Senior, about any plans for the future of the RNLI , more immediately about the demolition of the lifeboat house.  Though a demolition date had been heard to be set for 17th November this was still to be confirmed.   John was keen to note the six Scarborough Lifeboat Crew members that had sacrificed their lives whilst trying to save others and that a proper ceremony to remember those would be held before the demolition took place.   Plans were still in progress.  Also the Rememberance Sunday service 11/11, in recent years had been transferred from Oliver's Mount to the Life Boat House and John seemed confident that this would go ahead this year as usual and that they should be able to get this in before the  demolition took place.  I was also interested in salvage and memoriabilia belonging to the Life Boat house and asked if this would be auctioned off to raise funds.  John seemed to think as much of this would be recycled as possible but no formal plans had yet been made.   I did ask John for a statement regarding the demolition and any plans that the public could get involved with  he was clearly very busy and whilst he came accross as slightly vague about the whole 'demolition' process I do appreciate he was very busy and he has promised to keep me, us, and the public updated.

I also managed to chuck one in about the Yachting Club vacating the Lighthouse to accommodate HM Coastguard etc but John had no knowledge of this and referred to a Yachting Club member who said it was news to him ... so it must still be just a rumour then.

Anyhow back to the lifeboat - this will be kept in the water within the harbour when the Lifeboat House is closed and until the new station is built and yes those green bits are really to be made of copper ... the plans don't do the design justice.

So, its out with the old and in with the new ... and well done John Senior for taking on this important role. Lifeboat Operations Manager. Oh and fare thee well Tom Fox who is keeping in the hot seat at Town Hall.

TBH I haven't got a clue what yesterdays shindig was about but it all looked too exciting to ignore.  No doubt the Scarborough News will be reporting on it soon.

Wonder where this little beauty will finally  end up: 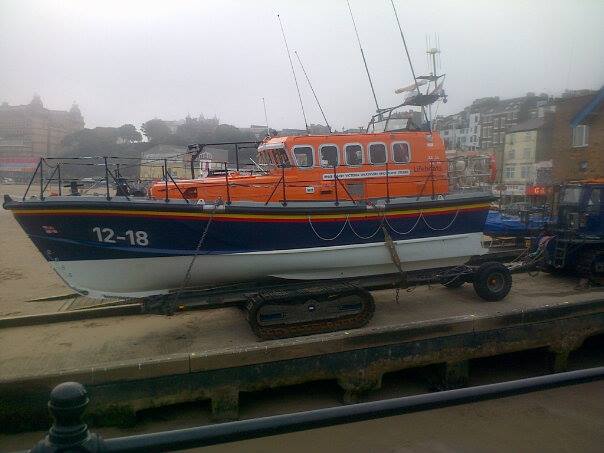 Oh and btw are there any female crew members in Scarbados?

"Scarborough's RNLI has announced that its veteran standard bearer Ross Tyson died on Friday
Ross, 84, had served as a member of the lifeboat team for over 70 years.

He was a member of the coastguard watch, based in the castle grounds, and the Life-Saving Rocket Brigade, in the early 1950s.

He joined the lifeboat team as assistant tractor driver in 1954, became a crewman on the town’s first inshore rescue boat in 1965 and was appointed head tractor driver when he retired as a crewman 29 years ago.

Ross witnessed the ECJR lifeboat tragedy of 8 December 1954, in which three lifeboat crew died. He watched the tragedy unfold from the lifeboathouse slipway.

On the 60th anniversary of the disaster, Ross unveiled a sandstone plaque at St Mary’s Church.
The plaque features a carving of the ECJR lifeboat, the names of the three who died (Jack Sheader, John Cammish and Frank Bayes) and the inscription: Greater love hath no man than this.

Ross was born on 12 February 1932 in what was known as Dumple Street, a few yards from the first-floor flat in Longwestgate which he shared with his wife Sheila for 60 years.

They lived in a flat on Westbourne Grove then in Barrowcliff for a few months before moving to Longwestgate in the same decade.

They had three children, one of whom, Terry, died a few years ago.

Ross said he had created the role of Scarborough RNLI’s standard bearer and that very few lifeboat stations had such a position...."

So the wraps are finally off the new Lifeboat Shed. What an eyesore it is. This vast, replacement RNLI building has cost millions of pounds of the general public’s donations, and it is totally unnecessary. The lifeboat has never been more efficient than where it is berthed at present, afloat on a pontoon and pointing into the harbour entrance. This is the location the coxswain and I attempted to promote to the RNLI inspector for the new lifeboat some years ago when I was operations manager (for more than 16 years). The site is not only more accessible to the sea, saving vital time, if this berth had been made permanent it would also have saved the huge rebuilding costs and the expense of the tractor/trailer and its ongoing maintenance. I accept that there is a need for a shore base for crew training, operations room and retail outlet but the Lancaster Inn, converted and refurbished would have served all these needs for a fraction of the cost of the new building. The coxswain and I spent a considerable amount of time and effort formulating the afloat boat proposal, but the RNLI representative didn’t want to know. I guess it’s not important when there’s a bottomless pit of money.