Why I do believe the local rag is 'scaremongering', though not a bad thing perhaps: http://www.thescarboroughnews.co.uk/news/spa-and-buildings-in-danger-as-cliff-work-is-unaffordable-1-6487701.  " The future of Scarborough’s famous Spa Complex and 380 nearby properties are under threat from increasingly heavy seas and the risk of landslides which have the potential to cause over £100m damage, a report has warned."

Not once do they mention conditions as at 2108, almost a hundred years from now.  However it is rather grande this has been brought to the table for forward planning. 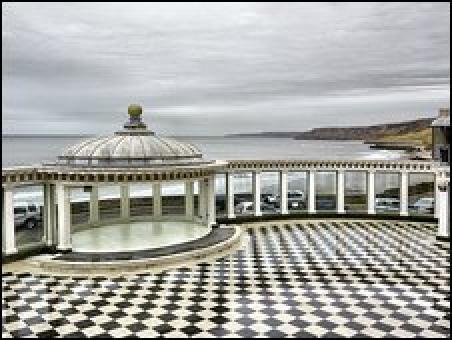 It will be interesting to see if Cabinet agree with the section 151 Officer, Nick Edwards, or will they make another  'popularist' decision.

One of the best 'Scarborough' films ever, with Rik Mayall & Helena Bonham Carter in "Dancing Queen" : http://www.youtube.com/watch?v=RG8_Lbrknz8

By sheer coincidence, Sirius Minerals RNS has announced Jupiter as one of the major investment funds that helped raise £ 43 mil to fund the York Potash project.    Since 2000, Jupiter has been headed by  Edward Bonham Carter (brother of leading British actress Helena Bonham Carter) whis is believed to step down in October 2014:  http://en.wikipedia.org/wiki/Jupiter_Fund_Management

Needless to say, the methods used in the York Potash mine shaft sinking could be used to shore up the cliffs and the 'spoil' from the construction of the mine could be used to add to the Spa's sea defences. opinion only.

tis outside the Spa that makes it very special :-)

introducing Steve Crawford who has done some amazing research on this subject ... more to follow

Some great news :-)  Can SBC match the funding?

"North Yorkshire County Council has agreed to give more than £1.2 million to protect Scarborough’s south cliff from falling into the sea.

Scarborough Council must also agree to pay the same amount for the project to go ahead.

The scheme is aimed at stabilising the cliff on which the Spa, along with homes, hotels and businesses, stand.

Although the scheme has been costed at £10.3 million, a further £4.3 million is required to cover any extra amounts necessitated by the need for any further work which may become apparent during the course of the operation.

County Councillor Carl Les, the count council’s Leader said: “Huge advances have been made in monitoring and understanding the way our coastline is affected by storms and by the day to day impact of our climate, which has led to significant investment in locations all along the North Yorkshire coast so that residents remain safe and property is protected wherever possible.

“Securing the safety of The South Cliff is a priority and the County Council is glad to be able to play a part in this vital project.”

The scheme has secured a £10.3 million contribution from central Government, through the Environment Agency.

He said: “This is a major and important project for Scarborough, and it is good to see our two councils working so closely together on something so vital to our town.”

The scheme still must be approved by the borough council.

It will be voted on by members in September."

If it wasn't for EU funding & that coastal contribution fund those 'capitalists' contribute it could be... our Spa ... & Town Hall.