i   Boulby Potash Mine - Update

Three key experts were present to present to a limited turnout of about twelve very nice folk, four representatives who sit on Scarborough Council albeit a dual, two tripples & one mad hatter.   Anyhooos Loftus Town Hall is an exceptional building, set in an exceptional Town just North of Boulby Mine. ... 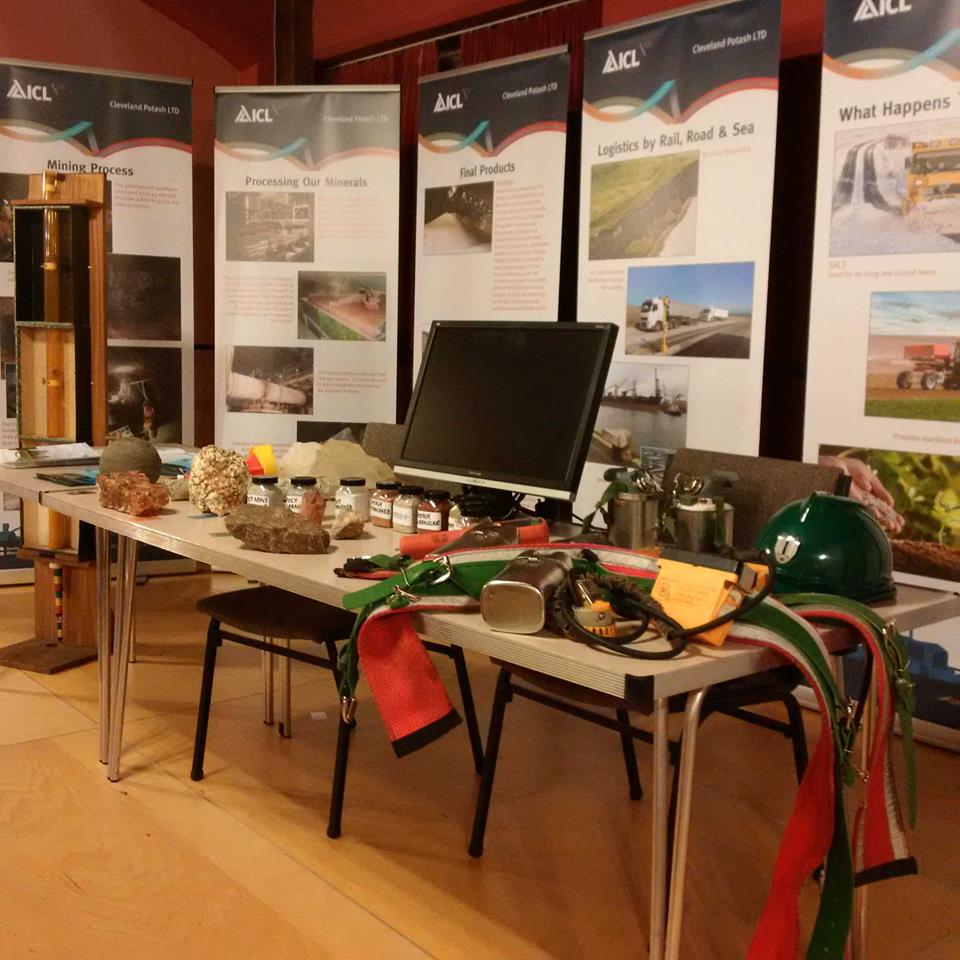 Peter Jones (New Management) of Boulby Mine was to present to the Parishoners & public and outline Boulby's plan for the future.   Under their current planning permission that expires in 2023 Boulby mine two minerals Rocksalt and Sylvite.  Rocksalt mainly for highways and added to feedstock with Sylvite for fertiliser.     Jones explained why they need to start their 'road show' now and to let the public know they 'Boulby' have a bright future.  Rather prudently Boulby have entered into early discussions with the NYMNPA  regarding future planning procedures and have timetabled a public consultation exercise that began 3rd April at Loftus and will cover the whole region with an expected planning determination by no later than 2018.

Polyhalite is a potassium based fertilser.  Polysulphate is sulphur based.  Boulby is the biggest mining employer in the UK. Owners ICL have invested over £360mil in recent years to secure the future of Boulby and highly  value their 'asset'. ICL is the fourth biggest fertilser producer in the world.

Boulby also currently employ 750 workers.  Of the recent redundancies, Boulby asked workers the option of voluntary redundancy with full redundancy benefits.   425 members of the workforce took the option of early retirement (voluntary)  with 65 compulsory redundancies, creating financial efficiency to preserve the "750 jobs that we have at the moment".  85% of the workforce reside locally in Whitby, Redcar, East Cleveland and North Yorkshire.   The annual wage bill is £37mil with most of that spent in the local economy.

Why the 'efficiencies'?   Operating costs.  The global price of generic potash had fallen in recent years, from $4/500t to  $165t  following a glut in holding of fertiliser stock, increased access to potash commodity, uncertainty with respect to supply and demand , akin with many other global commodoties dependent on geopolitical uncertainty, resources, research etc.... simply  -  supply & demand.    Boulby confirm that global potash prices are again on the rise.  Stocks must be low and demand increasing.

Working closely with Durham University, research & technology Boulby openly admit  that their current base mined fertiliser product will be exhausted in 4/6 years.  Sylvite or Sylvinite lies above the seam of Polyhalite (the target mining product of Sirius Minerals) .  Whilst polyhalite (Poly4) has been under the radar of  Boulby for some time (about six years) it is a harder mineral to mine than Sylvinite (being in a lower seam and of a different mineral composition).   Due to research & improved technology advancements Boulby are now keen to exploit this further mineral resource, Polyhalite.

Not only do Boulby seek to focus on the 'fertiliser of the future' Polyhalite (as described by Sirius Minerals) but thanks to Boulby's research and trials their intention is to mine FOUR products within their boundary.. Rocksalt, Potash, Polyhalite and the recently added 'Carolyte'.

Bearing in mind close neighbour Sirius Minerals holds the same seams...  albeit give or take a few geo faults aka Southerly, both Potash producers could and would benefit, as would the whole region in terms of economic contribution.  Indeed global benefits 'feed the world'  from the blends that a local mineral resource 'asset' that is found to be the largest, deepest and most natural form of potash 'in the (known)  world'.

Anyhoos, back to this 'Carolyte'. This is a blend between  the seam of Sylvite & Polyhalite and contains ALL the micro mineral ingredients, aka  necessary nutrients that can be combined, blended or diffused to accommodate  ALL crop yeilds across the globe ... dependent on soil equations, etc etc.   Exciting innit? 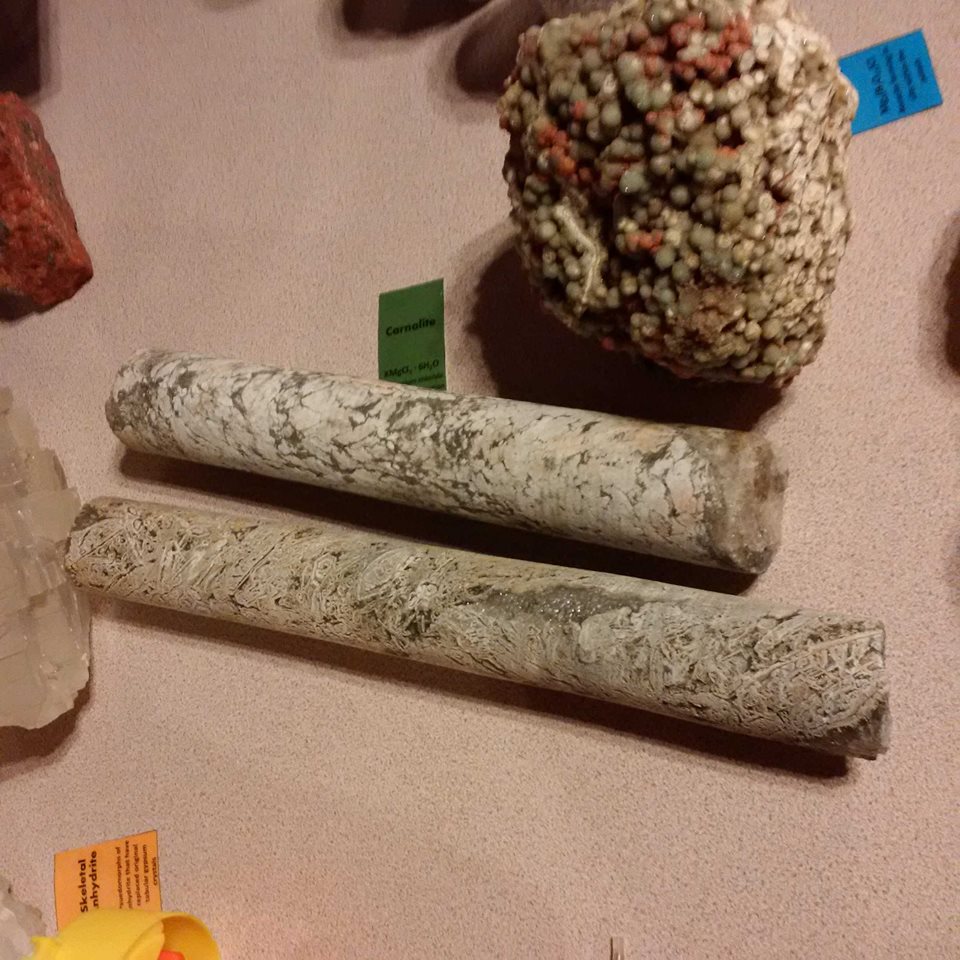 However Boulby acknowledge they cannot predict the future with regard to commodity markets (who can ;-) so Why Now?

Timescales for the future of Boulby's planning permissions started in January 2017.  As with all commodity markets, Boulby are trading on 'shifting sands'.

The blending of Polyhalite & sylvinite to create 'Potash+' Boulby are seeking the NYMNPA  plannning  for 'Status Quo'.  ie to keep the company as it is with an expected lifespan, including the 750 workforce hitherto for the future upto  20 to 25 years.   In simple terms, not a FULL planning application but an Extension of their current Mining Licence.  Subject to public consultation.

Why up to 25 years?   Further & future  ICL investment is needed to improve safety & secure jobs.    (and of course to keep digging and establish new markets for a local product)

Best not mention Volkovskite (I held it in me greasy hand)

There are FOUR main elements to a Renewal of Licence under Core Econmic Policy E:

Phew.   As a worse case scenario it would take four years to decommission the mine ... properly.

As for that Dark Matter stuff ...

I mebbe stoopid but I aint daft ;-)

Personally am all 4 a Potash Powerhouse of the North.

Hey ho....  "a great Pirate does not require such intracacies"

"... To celebrate National Volunteer Week, which runs from 1 to 7 June, North Yorkshire County Council is inviting people to find out more about voluntary work to benefit the environment.

Countryside volunteering is for anyone who wants to help to maintain access to the countryside and support nature conservation. Tasks include inspections, surveys and low-level maintenance of public rights of way. There is also an opportunity to join the North Yorkshire Rotters, who advise people on how to reduce waste and save money through composting.

“We have countryside volunteers spread around the county, but we are keen to hear from anyone interested in joining them. The activity includes reporting and photographing problems, doing minor maintenance, such as cutting back overgrowth around signs, and once or twice a year helping with large scale surveys of paths. Tasks can be done at a time to suit the volunteers, including weekends.

The Rotters are volunteers from all over North Yorkshire and York who offer advice to people who would like to reduce waste and save money through home composting. If you enjoy meeting people and like attending shows, events, talks and demonstrations, we can provide the training and you can choose which events you’d like to attend.”

To find out more about joining the Rotters ..."

I dunno about you but thanx to no snow and no show my house is filled with spiders ;-/

Thing is if I kill one all their friends and family are gonna get me ... now about that uniqorn.

Mind I can do snakes, rats n those little furry things with wings and radar :-)

Volunteering thats for the Greys tho innit...

"Sembcorp Utilities UK says it wants feedback on the proposals, which evolve around a factory being built on the site of the former Teesside Power Station."

"This is an easy task - the existing taskforce for the SSI UK site could simply be redirected to a new east Cleveland focus, as has been suggested by Redcar MP Anna Turley.

The starter would be with Sirius Minerals, which is developing a similar polyhalite mine down the road at Whitby.

That’s not due to go on stream until 2022, but work on shaft sinking and the tunnelling of the produce conveyor to Teesport is about to start.

There is a natural correlation here, and such a taskforce should seek to see if some kind of service level agreement could be struck whereby the taskforce would underwrite recruitment costs in return for prioritising the Boulby men.

This kind of work will last some time, and can act as a feeder for work at the mine when it starts, as with the sinking work at Boulby back in the 1970s.

Of course, there will be those workers among the 230 who would want to look elsewhere for new opportunities..."