Recycled: "From 1885 until its closure in 1965 the old railway line from Scarborough to Whitby took goods and passengers up and down the North Yorkshire coast. Now it's an off road route through the North York Moors National Park for walkers, horse riders and cyclists.

You might decide to make a slight detour and visit one of the quiet bays such as Crook Ness, Cloughton Wyke, Hayburn Wyke, Stoupe Beck Sands or Maw Wyke Hole, or make a circular walk of it by taking in part of the Cleveland Way.

You may prefer to stop for a pint at the Hayburn Wyke Hotel or for afternoon tea at the old station in Cloughton or the cafe in Ravenscar. You could hire a bike from Trailways at Hawsker. You can explore our early industrial heritage at the Peak Alum Works - the birthplace of the British chemical industry - where locally mined rock was combined with human urine, brought up by barge from London, to make Alum  which helps fix dye to cloth for the emerging UK textile industry.

You'll be confounded by the town that never quite was at Ravenscar. You can stop to wonder at the 13 spans of the 120 feet (36.5 metre) high Larpool Viaduct (left, centre) over the River Esk in Whitby. Or you may simply want to take a bit of time to enjoy the numerous sights and pleasures of Whitby, Scarborough or Robin Hoods Bay.

In an act of great foresight, Scarborough Borough Council bought the line shortly after it closed. Because the track ballast was made from cinders rather than crushed stone, many locals call it the Cinder TrackÂ. It now forms 21 miles (34.4 kms) of Route 1 of the National Cycle Network"

Not to be confused wih The Cleveland Way: http://www.nationaltrail.co.uk/cleveland-way

Anyhoos lots of exciting developments are happening along this route, with many bridges twixt Whitby n Skardiborgivegas ... 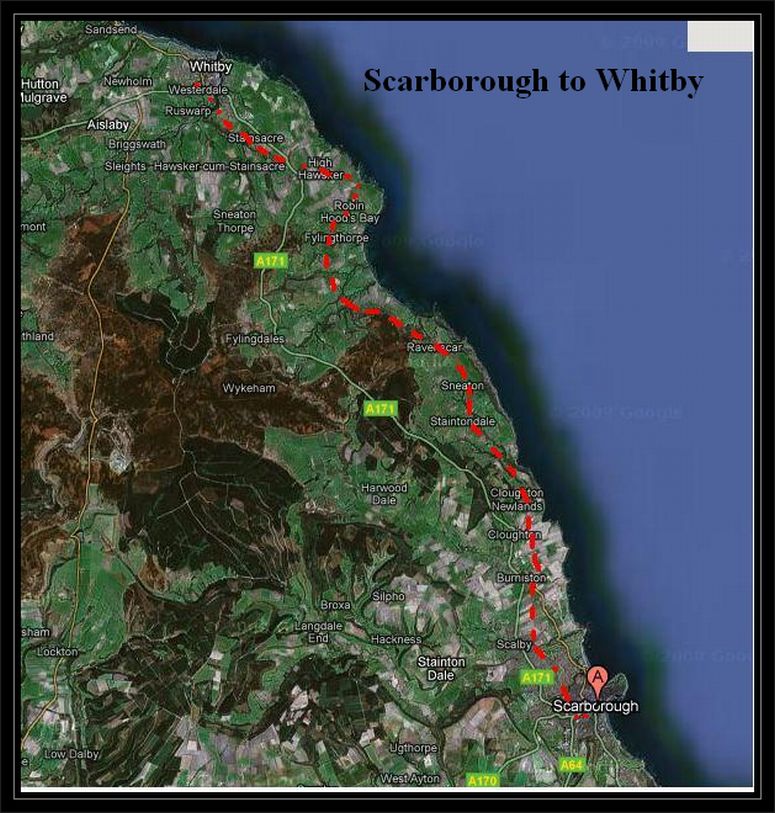 Erm, how about an eco-tax on those blasted illegally parked engine running tinternet delivery vehicles ....

"Restoration and improvement plans drawn up by Sustrans for the Scarborough-Whitby old railway are now available to download in draft form for the public to view and comment on."

“They are a law unto themselves. Sometimes to skin the cat you’ve got to have a weapon to club them with.

“It doesn’t preclude these events, it just makes them easier to manage.”

“Playing in the sea can be ridiculously dangerous, it can change in an instant – ..."

"A zoo in Mexico has been showing off an unusually large litter of Mexican grey wolves to the media.

Eight cubs of the endangered subspecies were born in Los Coyotes Zoo in Mexico City in April.

It is unusual for there to be more than four cubs in a litter so conservationists were delighted when mother Pearl gave birth to eight healthy cubs.

An official said that there were only 350 of the wolves left in the wild.

The Mexican grey wolf was almost wiped out by hunting, trapping and poisoning, but the US and Mexican authorities are trying to reintroduce them to the wild."