"Further to the proposed lease of an area of Endeavour Wharf to Dalby Offshore Services it is intended to place an exhibition in the Whitby TIC commencing on the 29 August and running to 12 September 2015. In association a public consultation event, open to all, will take place at Whitby Coliseum on Sat 5 September 2015. The event will run from 10am until 5pm with presentations at 11am and 3pm. This will be publicised in local and social media"

For a preview see here:

Oh, sod it, : bear in mind the Abbey sits opposite and could be reflected in the glass ... I think tis a very charming and fit for Whitby ... but I don't live there .. but the ground floor will be flood proof and there will be a loading area, admin, storage etc with public access all around, the car spaces taken up are negligible and ooh tis quite a beauty, & of course multi-purpose ... and don't ya just love the essence of Whitby is captured ... don't spose they will be calling it Carfax ... 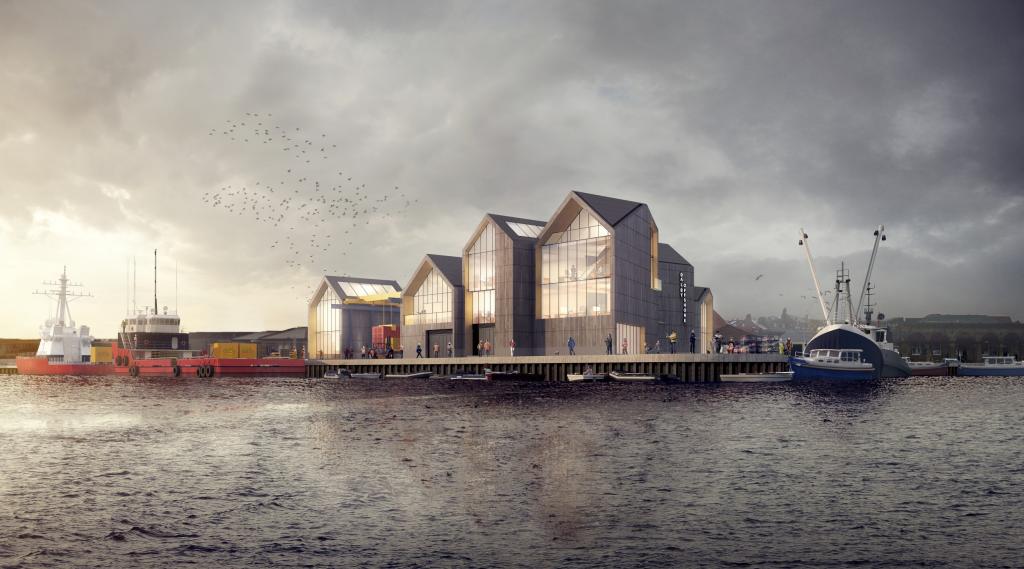 "The design is orientated towards the key harbour frontage where materials and services will be loaded on and off the support vessels. This creates an active and varied massing fronting the harbour and reflects the complexity and variation on the opposite bank. The proposals articulate the massing to reflect the different internal programmes but is carefully orchestrated to enable large single floor plates internally that can be space planned to allow for flexible arrangements and inter-department working.

The building will use traditional materials common to harbour side environments but in a modern interpretation, rain-screen timber cladding shrouds the water and weather tight envelope beneath. The facing materials can then be finely detailed avoiding large flashings and complicated detailing to resolve the geometric forms. Material uniformity enhances the composition of elements. An integrated concrete flood defence plinth ensures its resilience to future flooding.

Group Ginger engaged the local interested community with the design proposals and the development. Early consultation informed the competition entry and responded to key feedback, to create a centre piece for Whitby and a design that followed wharf traditions to deliver a building that wasn’t ‘dull’.

Nope, its certainly not 'dull' ... don't spose Dalby Offshore will be competing their services with the Scarborough RNLI ... Doh thats a Charity innit ... could be some overlapping or overhanging ... now wot will the RNLI do with their old boats ... caution.

An Essay on Criticism by Alexander Pope ... ooh a new one for me book list

"Tis best sometimes your censure to restrain,
And charitably let the dull be vain; ..."

"Such shameless bards we have, and yet 'tis true
There are as mad, abandoned critics too.
The bookful blockhead, ignorantly read,
With loads of learned lumber in his head,
With his own tongue still edifies his ears,
And always listening to himself appears.
All books he reads, and all he reads assails,
From Dryden's fables down to Durfey's tales.
With him, most authors steal their works, or buy;
Garth did not write his own Dispensary.
Name a new play, and he's the poet's friend,
Nay showed his faults – but when would poets mend?
No place so sacred from such fops is barred,
Nor is Paul's church more safe than Paul's church yard:
Nay, fly to altars; there they'll talk you dead;
For fools rush in where angels fear to tread.
Distrustful sense with modest caution speaks,
It still looks home, and short excursions makes;
But rattling nonsense in full volleys breaks.
And never shocked and never turned aside,
Bursts out, resistless, with a thundering tide."

"A mother ship will be sited at sea where workers might be based for two or three week stints."

"Vessel transfer operator Dalby Offshore is to develop a renewables and offshore service centre in Whitby in the east of England after the local council agreed to a land lease.

Endeavour Wharf will become the company’s headquarters and home base for its fleet of offshore service vessels following the agreement with Scarborough Borough Council.

The site includes offices and a marine control centre.  It also hopes to become a logistics hub handling up to 30 service and support craft working in the central sector of the North Sea.

Stuart McNiven, managing Director of Dalby Offshore said: “This agreement is fantastic news for Dalby Offshore, but also for the Northern Powerhouse and the wider Yorkshire Region, which will soon have a brand new service facility capable of being used by a variety of companies working in the UK sector of the North Sea.

“It is aligned to our strategy to develop ports, wharves, office and other facilities capable of providing a “one stop shop” servicing wind-farms over the next 20 to 30 years.”

The development will be the biggest in the centre of Whitby in modern times and completion is planned for mid-2017.

The RNLI has been further delayed due to high winds and is now scheduled to be completed end of August ...