Further to my enquires to Igas regarding Kirby Misperton I had a few further questions, as follows:

Thank you for your swift response.

My intention of attending the Yorkshire Post debate was to find out about exclusion zones.   Mark Hill (NYMNPA)  explained  that  (as I understand it) each exploratory well is assessed by the British Geological Society when determining exclusion zones. I heard that Boulby Potash  mine had applied for a 15 mile exclusion zone, hence my interest.  Also there is the RAF Fylingdales American Defence base which is very sensitive to ground vibration in the NYMNPA

I did wonder if Igas had a policy on 'exclusion zones' and if you could point me to this.

I do accept that you have confirmed Igas have no licences in North Yorkshire area and have no connection with Viking Gas.

Though I understand a few operators have applied for licences in and around this area.  I noticed that 'Frack Off'  have suggested you are using Cuadrilla 'rigs' and that there logo appears to be also on the 'rig' at Kirby Misperton (Viking Gas).  Hence the confusion with Igas and Viking Gas.  Perhaps there is a simple explanation?    Like a shortage of rigs? Please would you identify who supplies the 'rigs' ,(along with contact details) and if these rigs are shared by varying shale gas operators.  Clearly this needs to be addressed because if  the same 'rigs' appear here in North Yorkshire then there may be some confusion.

Also I understand that once the 'gas' has been released by an 'operator' then the gas does not 'rightly' belong to anyone until it is captured or put in a pipeline, is this true?  This seems to contradicts the exploration to extraction process, so I was hoping for some technical detail such as what time frame is there from the fracturing or releasing of the gas to the capture of said gas?  Is this instant, take a few hours, days, weeks or months even?

It would seem all the 'bother' Igas are getting will eventually set the 'Standards'  for the shale gas industry in the UK, so yes it is very interesting what Igas have to say on the matter.  John Blaymires did volunteer to answer questions so I hope you do not mind me asking for the 'facts'. 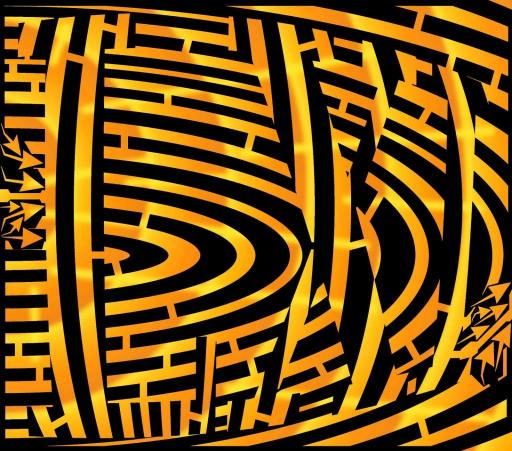 Thanks for your email.

Typically there are no exclusion zones although this is something that is determined at a case by case basis, by the relevant authorities including; The Environmental Agency, Planning Officers, The Department for Energy and Climate Change etc.

In terms of rig usage, operators typically tender to relevant rig contractors and award contracts based on various parameters including their safety record and technical ability.

In relation to your third point, gas is “captured” immediately. If during  the exploration phase, gas is found and deemed viable then production commences. During the production phase, all gas is captured and delivered to the relevant customer via pipelines or the equivalent.

This is a link to a diagram I believe you may find useful (it outlines the stages of shale gas and oil): http://www.shale-world.com/wp-content/uploads/sites/9/2014/04/stages-of-shakle-gas-and-oil-decc.jpg 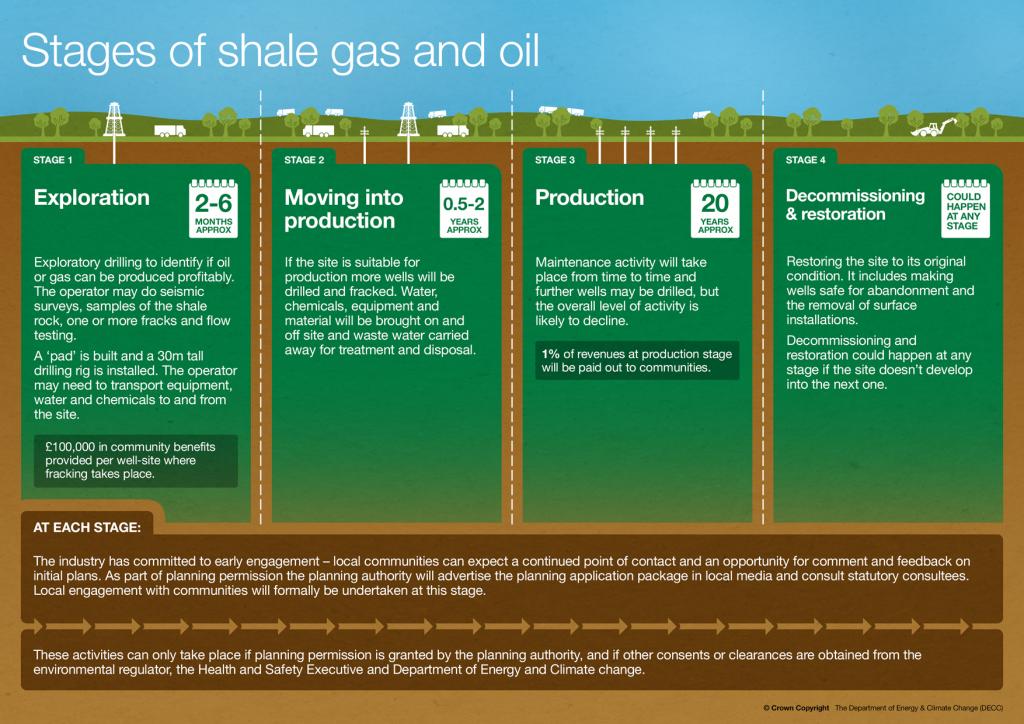 Interestingly, this 'diagram' clearly shows that the 'community benefits'  are provided per well-site where fracking takes place, is strangely placed under the column marked exploration.

So is fracking part of the exploration phase or not?

I just knew I was going to have a 'special' relationship with Igas.  Still at least they are responding very swiftly and this confirms that the 'rig's are multi user.

Indeed as they are coming accross as quite cuddly,  http://www.youtube.com/watch?v=vbf4weFbuS8

The Spencer Ogden Energy Debate with Lord Smith, Chair of the Environment Agency, Igas's CEO  Andrew Austin -  Q's from Greenpeace' Joss Garman @ 2.30 m  on flaring, and  at 7.52 - Andrew Austin "we don't know if the shales will flow or not ...my position is the country deserves to find out if they do or don't ...   if it doesn't work the rest of the conversation is entirely academic", http://www.youtube.com/watch?v=_YUOqmwz94Q

FaF Comment: "The 13, What we can tell you are facts. Todate and World Wide more than 1,000,000 wells have been fracced. Of these 800,000 have been fracced in the USA. Despite Greenpeace assertions, the Americans have remained quite healthy and they are not subjected to any more earth tremors as its normal. (The UK, by the way, gets about 300 earth tremors per year) Nobody has died as a result of fraccing (excepting industrial accidents , drill pipe fell on his head etc..) Nobody has been poisoned. The problems are a fabrication by Greenpeace , they cannot win the argument against the dire need of the UK to have an independent energy source, so they have invented a lot of scare stories none of which are true.....Ask them to point out where this has happened and what was the scientific proof......well acutally there is none !
As for Global Warming, the earth cycles, breaths if you like, it warms up and cools down. The whole of the UK has been under ice sheets up to a mile thick several times , or the area where the UK is now situated has been . The present situation is that the European Plate is ramming up against the Asian Plate, this is inducing a twist on the European Plate, which is sending the UK , Scandinavia, and parts of Russia North East. Given 50,000,000 years, or so we will be into Artic winters and these will continue for probably another 100,000,000 years, give, or take a couple of minutes ! and the UK will emerge into the Pacific Ocean. Provided the whole country does not get subducted beneath the Asian Plate. In which case it will re-emerge anywhere as red hot lava through vulcanos . The thing most driving the world's climate is the sun, and that too apparently warms up and cools down, very connected with sun spot activity, they say. At the moment we are in a warming phase. There is nothing mankind can do about it, Greenpeace seem to think you can preserve the world in aspic, by living in a Yurt (but even Mongol's burn yak dung, which makes a pretty smoky fire !)"

Some informative vids on Ineos (they bought the Igas fields up North) PEDL333 (?)

& some fraccing facts according to Ineos:

Statement from Cuadrilla Regarding Lancashire County Council’s Development Control Committee’s Decision to Deny Planning Consent for the Application to Drill, Fracture and Flow test up to Four Wells at Preston New Road

“We are surprised and disappointed that Lancashire County Council’s Development Control Committee has denied planning consent for our application to explore for shale gas at Preston New Road, particularly as their decision follows a positive recommendation by the Council’s Planning Officers.  We remain committed to the responsible exploration of the huge quantity of natural gas locked up in the shale rock deep underneath Lancashire. We will now take time to consider our options regarding an appeal for Preston New Road, along with also considering appeals for  the planning applications recently turned down, against Officer advice, for monitoring and site restoration at Grange Hill, and last week’s decision to refuse the Roseacre Wood application.

It is over a year since the application was submitted to the Council and the committee’s decision comes after Planning Officer’s scrupulously went through the rigorous, 4,000 page Environmental Statement that accompanied our application and conducted widespread public consultation, which led to their positive recommendation.

We completed the most comprehensive Environmental Impact Assessments ever carried out for operations of this kind. These Assessments are the product of thousands of hours of work from independent expert environmental scientists and other engineering specialists and they demonstrate beyond question that the operations can and will be conducted safely and without damage to people’s health or their environment.

The UK and the EU has a strict regulatory framework for governing oil and gas exploration and production and we have had to secure many permissions and permits before work can start.

If we can unlock this shale gas potential it will help create jobs, generate economic growth, help fuel and heat local businesses and homes and boost local tax revenues for Lancashire.  It is regrettable that the County Council has decided not to support this application in the face of positive recommendation from all regulators and their own Officers.”

"This is its first move into owning oil and gas assets.

There are indications its chairman and controlling shareholder Jim Ratcliffe intends to buy more.

The 12 fields, mainly in the southern North Sea, were sold in March by German firm RWE to the LetterOne company controlled by Mikhail Fridman."

Ooops no its closer : Breagh

Small Print: The transaction is subject to competition clearance from the European Commission. We do not foresee any major issue with receiving this clearance, and are hopeful for a completion date in later this year.

Oh, is Ineos registered in the UK or EU Mr Radcliffe?

Not that thats any of our business ... amazingly Local Authority input stops at the tide line ... they can do what they want 'offshore' ...  its nowt to do with us ... its part of the MMO's mess of a remit.

Anyone got a U-boat.